Home
News
Clarion Herald Article--There will be Room at the Inn!

Clarion Herald Article–There will be Room at the Inn! 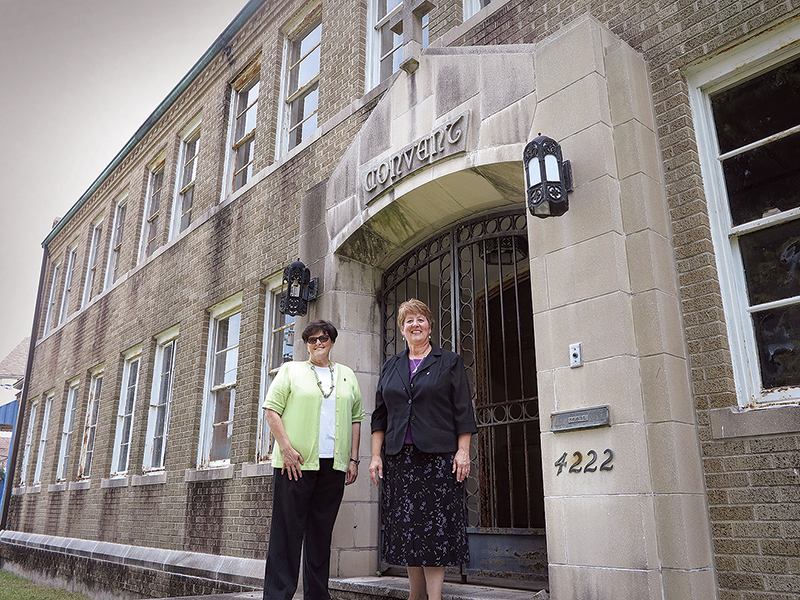 An outreach ministry that will offer short-term, hotel-style lodging to homeless mothers and their children will commence next year in the former St. Matthias Convent on the grounds of Blessed Trinity Parish in Broadmoor.

Located at 4222 South Broad St., next to St. Matthias Church, the two-story, beige-brick hub will be called Hotel Hope. It will provide free accommodations, daily meals, counseling and referral services to as many as 12 homeless families at a time, or a maximum of 40 guests.

All support will be geared toward helping families achieve residential stability and economic self-sufficiency after a job loss, family conflict or some other crisis.

“We want this to be a place where mothers can get restorative healing; a place where they’re able to figure out what propelled them into the housing crisis and how to get out of it,” said Presentation Sister Mary Lou Specha, Hotel Hope’s executive director, noting that $200,000 has been donated to date in an ongoing capital campaign that hopes to raise $1 million. 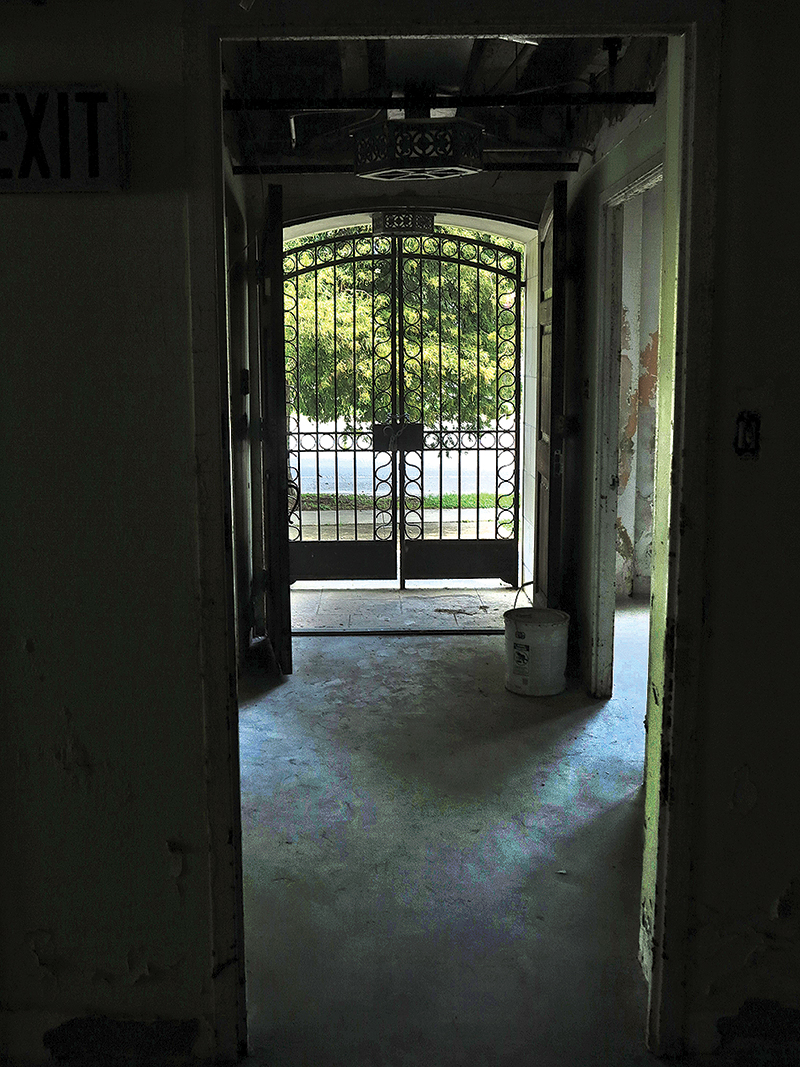 About $560,000 will be used to renovate and furnish the former convent, built in 1960 to house the Dominican sisters who staffed St. Matthias School. The remainder will cover Hotel Hope’s first-year operating costs, which include staff salaries, food, utilities and insurance. Hotel Hope will occupy the space at no cost through a lease agreement with the property’s owner, Blessed Trinity Parish. “It will be a place where people can feel their dignity and have a space that’s private and secure and safe, with their families intact,” said Sister Mary Lou, noting that many shelters separate older boys from their mothers or do not accept children at all. “Every week – at least two, three, sometimes four times a week – I meet a mother who is homeless,” she said, citing a recent case of a mother of two toddlers who had just had a newborn and had no place to go. With New Orleans’ dwindling availability of affordable housing, it takes an average of 22 days for a homeless woman to find housing, she said. “In those 22 days, where does she go?” Sister Mary Lou asked. 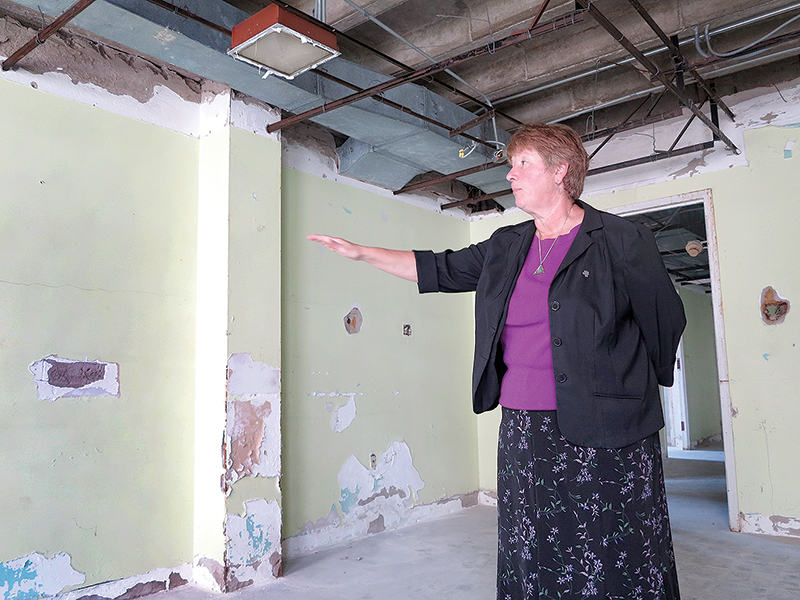 Nestled near the curve that links South Broad to Napoleon Avenue, the former convent, with its sturdy framework of concrete and brick, survived Hurricane Katrina but suffered significant interior damage after taking on eight feet of water. Renovation plans, executed pro bono by New Orleans architect Marcel Wiznia of Wiznia Associates, call for a nine-month overhaul that will refurbish 12 pre-existing, modest bedrooms on the second floor and equip each with a sink, closet, beds, chairs, a small table and desk. Guests will access bathroom facilities down the hall, with room pods assigned to one of four units containing a toilet and a shower or bathtub. Because the building has no elevator, an additional bedroom and bathroom will be incorporated on the first floor for homeless families with physical challenges. Guests, who will enter on South Broad, will be greeted by a comfortable lobby and indoor play space for their children. The convent’s former chapel, still lit by its original stained-glass windows, will be sectioned into serene spaces for inter-faith prayer, story circles and reading. Other amenities, including a common kitchen and dining area, laundry and rooftop terrace, will foster fellowship among guests and a homelike, supportive atmosphere that traditional shelters cannot provide. 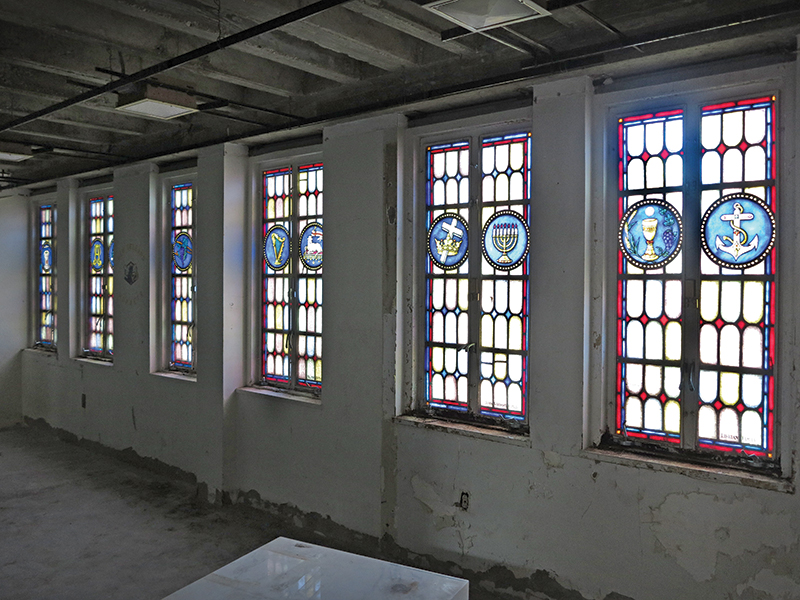 Within 72 hours of a guest’s arrival, Sister Mary Lou and Hotel Hope’s director of outreach, Presentation Sister Julie Marsh, will tailor a plan of action for the family to help it move forward and acquire sustainable housing. “We get to the source of why they’re homeless,” Sister Mary Lou said. “If someone needs further education, job training, life skills training or other services, we will refer them to one of our collaborators.” The holistic approach will involve linking the mothers and their children to outside resources. For example, Delgado Community College and the YMCA offer certified nursing assistant programs. “Or maybe they want to be a registered nurse,” Sister Mary Lou said. “We don’t want to limit them. Everybody who is homeless is not poor and uneducated.” While room and board will be subsidized by Hotel Hope, guests will be asked to give back in the caretaking of their building and grounds, whether it’s washing dishes, sweeping floors or gardening, she added. 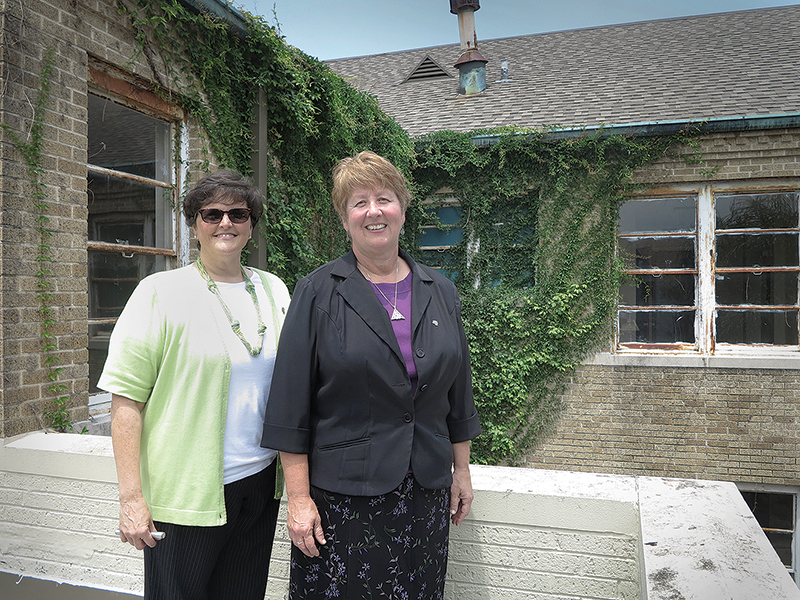 Hotel Hope’s roots go back to 2009, when a group of local Catholics saw a TV interview of Jesuit Father Stephen Sauer, former pastor of Immaculate Conception Church in New Orleans. “One of the questions that came to him was, ‘We do a lot of things locally for homeless men, but what are we doing for women and women with children?’” Sister Mary Lou said, noting that the question sparked the conversation resulting in Hotel Hope’s incorporation as a 501(c)(3) in March 2010. Organizers considered sites in uptown New Orleans and Central City before zeroing on the Blessed Trinity location, which ironically had functioned as a Catholic Charities-operated shelter for homeless women from 1984 until its Katrina-forced closure in 2005. “I would drive by (the former convent) a lot and I would see this Catholic Charities sign and I’d say, “I wonder what they’re doing with that building?’” said Sister Mary Lou, who left her longtime ministry at Café Reconcile at the end of 2011 to be chair-president of Hotel Hope’s board. After a taking a tour of the building with Father John Asare-Dankwah, Blessed Trinity’s former pastor, she was sold. “When you see the bones of the building, it’s perfect for us,” she said. 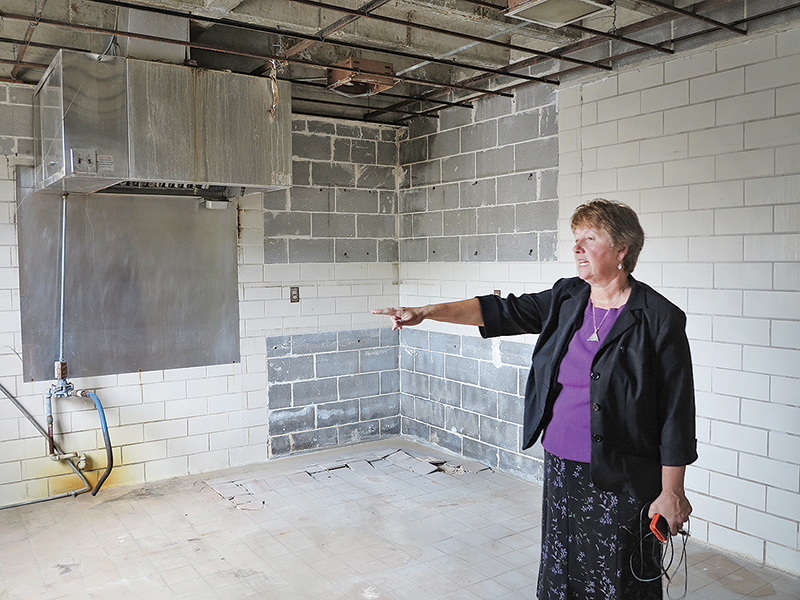 Other early benefactors of the ministry include the Presentation Sisters, who are subsidizing the salaries of Sister Mary Lou and Sister Julie for one year, and parishioners of Blessed Trinity, the faith community formed after the Katrina-induced merger of St. Matthias, St. Monica and Our Lady of Lourdes. Father Dennis Hayes, who became pastor last month, said his congregants are “thrilled” about seeing the convent transformed into Hotel Hope and are eager to assist as volunteers. Last Advent, Blessed Trinity’s social outreach ministry – Beyond the Church Walls – worked with Sister Mary Lou to give Christmas presents to the children of incarcerated men. “If the parish council and the parishioners had been against (Hotel Hope) from the beginning, this would have been a dead issue,” Father Hayes said. “I think the people genuinely desire to do something for homeless mothers. All of the people around here had eight feet of water in their houses, so they know what it’s like to be displaced and homeless. They know from their souls what it’s like to be out of their homes.” 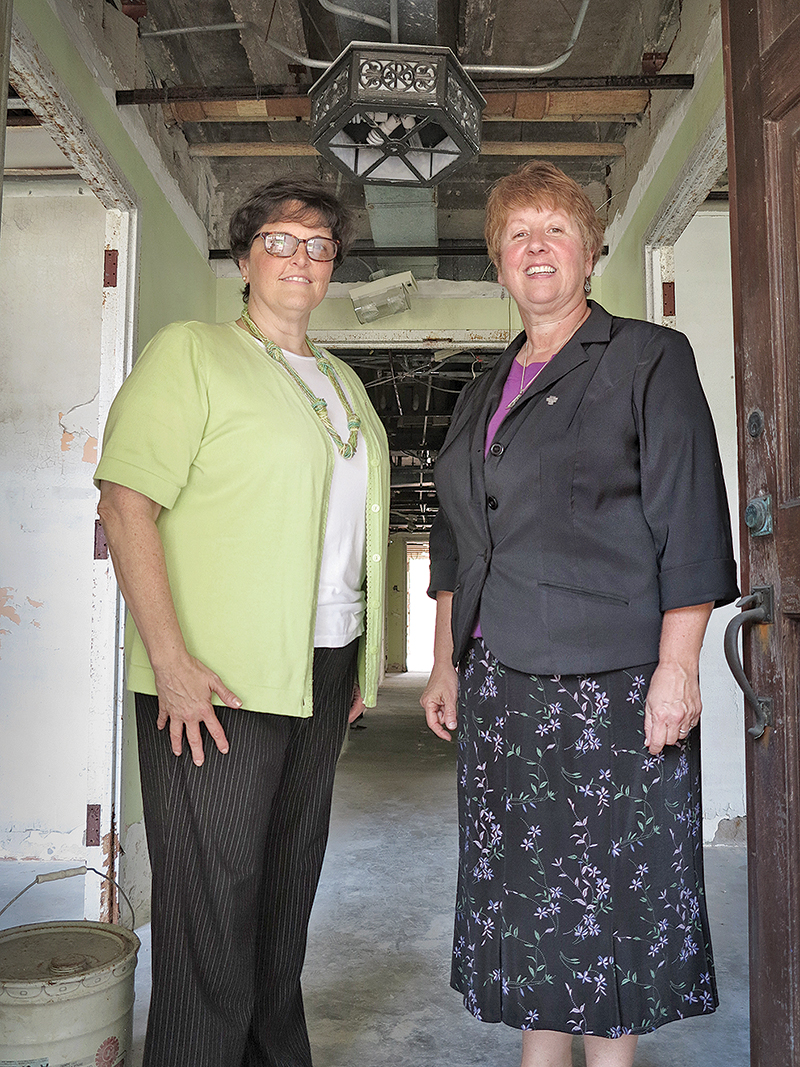 Sister Mary Lou hailed parishioners as living examples of Catholic social teaching. There were no cries of “not in my backyard” when Hotel Hope’s organizers expressed interest in the Broadmoor site, she said.

“A lot of people go to church, but they don’t walk the talk,” Sister Mary Lou said. “But the people here at Blessed Trinity are. They’re not just keeping their buildings to themselves; they’re creating spaces of hope and wholeness and wellness for the community that are really transformative.”

To learn more about Hotel Hope, including opportunities to donate or volunteer, visit www.hotelhope.org.

Beth Donze can be reached at bdonze@clarionherald.org. 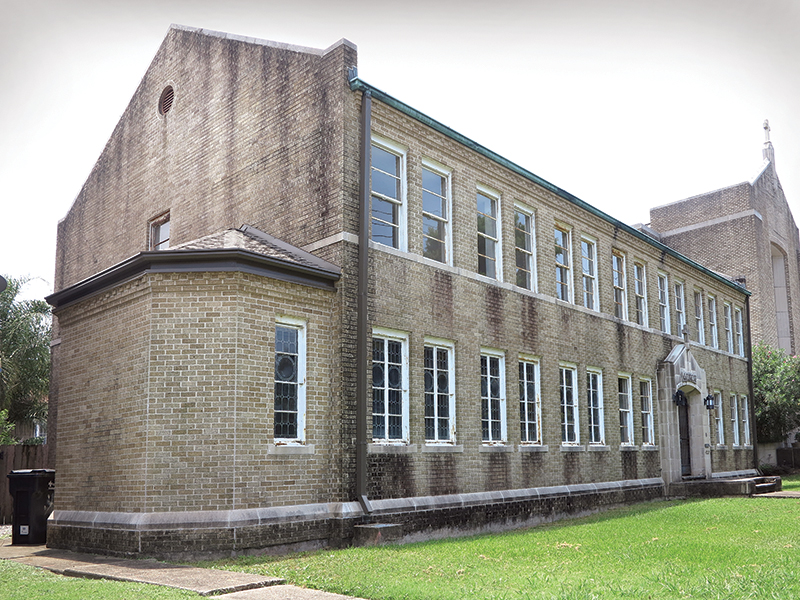 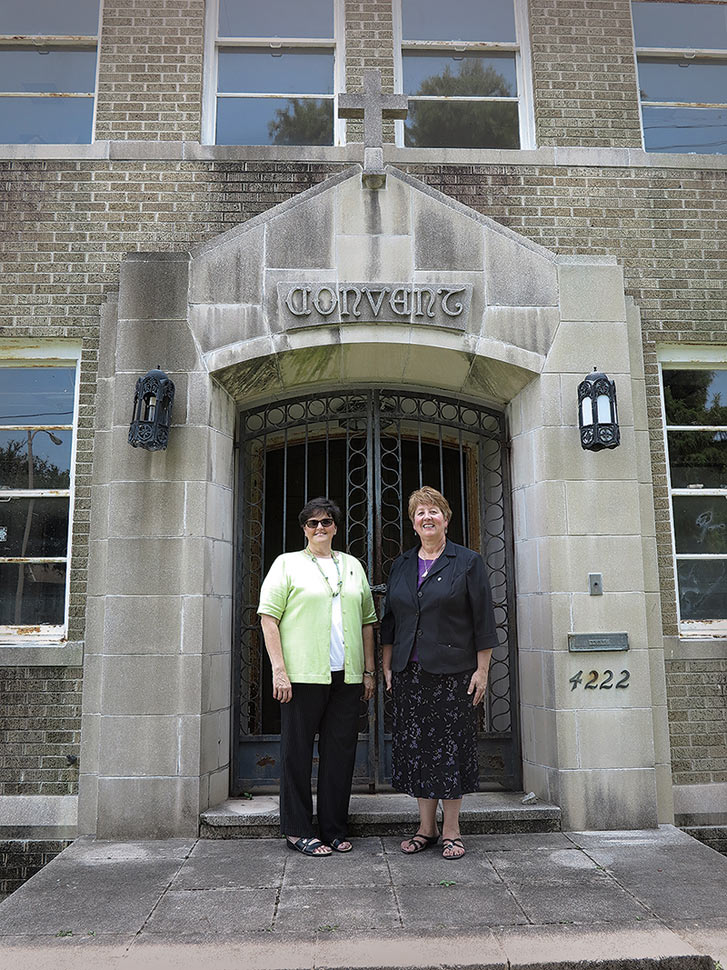 Research shows that permanent housing is the most effective soloution for long-term homeless families. Public funding is available for this purpose. Unfortunately, it can take up to six weeks to transistion families into their permanent residence. Hotel Hope will fill this gap.