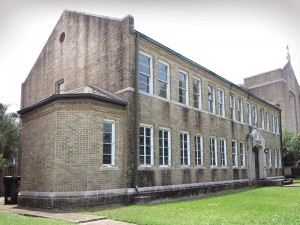 NEW ORLEANS, Dec. 19, 2014 /PRNewswire-USNewswire/ — Hurricane Katrina’s flooding in 2005 may have risen to 8 feet inside the former St. Matthias Convent, but the Gulf waters did not drown the faith and hope that remain here. A decade after its near-destruction, the 8,000-square-foot building will be transformed in 2015 into Hotel Hope, a 40-bed, short-term residence for homeless women and children.

The estimated $1 million project received a $100,000 Affordable Housing Program (AHP) grant from First NBC Bank and the Federal Home Loan Bank of Dallas (FHLB Dallas). The funds will be put toward the cost of renovating the building at 4222 South Broad Street, which is projected to open in late 2015 or early 2016.

“We felt very blessed to get the AHP grant from First NBC Bank and FHLB Dallas,” said Sister Mary Lou Specha, executive director of Hotel Hope. “First NBC Bank is deeply rooted in our community, and they are doing a marvelous job bringing funds to the local level. Receiving the AHP grant assisted us in attracting private funds. It has been a tremendous help.”

In addition to temporary shelter, the building’s first floor will house day facilities with showers, a laundry room, child care, prepared meals, clothing, telephones, and a computer center. As well, services will include job counseling, life-skills training, and mental-health screening and assessment.

“When you think about what they’re doing, in giving hope and helping to turn lives around, it’s just priceless,” said Brad Calloway, executive vice president of First NBC Bank. “First NBC is honored to support this project. It will help women and children who are coming from difficult situations and give them new hope and opportunities.”

Each year, FHLB Dallas returns 10 percent of its profits to the communities served by its member institutions, in the form of AHP grants. The grants are used to assist in the development and/or rehabilitation of affordable, owner-occupied and rental housing for very low- to moderate-income families.

Sister Specha highlighted the inadequacy of temporary housing for single mothers in New Orleans. “By my count, there may be less than 40 emergency beds in the whole city available for homeless women with children. But the need could be as high as 250 in one night.”

She said the 2010 founding of the nonprofit happened quite simply. “A man heard a priest on TV talking about the lack of services for homeless women and children. He called the priest, and that got us started. When we think that small ideas don’t go anywhere, it’s quite the opposite. This man didn’t have to make that call.”

Estimates from the U.S. Department of Housing and Urban Development (HUD), show that a family with just one full-time worker earning minimum wage cannot afford fair-market rent for a two-bedroom apartment anywhere in the United States. In New Orleans, this represents 13,424 family-households.

“FHLB Dallas is thrilled to partner with First NBC Bank to support Hotel Hope. The contributions of everyone involved in this worthwhile project will help fill a real need in the community,” said Greg Hettrick, vice president and director of Community Development at FHLB Dallas.

This year, FHLB Dallas awarded $9.8 million in AHP funding to 33 projects primarily within its five-state District of Arkansas, Louisiana,Mississippi, New Mexico, and Texas. The 2014 grants will result in the creation or rehabilitation of 1,586 housing units. Since the program’s inception in 1990, FHLB Dallas has awarded more than $228 million in AHP grants to help approximately 42,000 families obtain safe, affordable, and quality housing.

First NBC Bank Holding Company is a bank holding company, headquartered in New Orleans, Louisiana, which offers a broad range of financial services through its wholly-owned subsidiary, First NBC Bank. The bank serves its customers from its main office in the Central Business District of New Orleans, 30 full service branch offices located throughout its market and a loan production office inGulfport, Mississippi. Established in 2006, First NBC had assets of approximately $3.6 billion as of September 30, 2014.

About the Federal Home Loan Bank of Dallas

The Federal Home Loan Bank of Dallas is one of 12 district banks in the FHLBank System created by Congress in 1932. FHLB Dallas, with total assets of $37.5 billion as of September 30, 2014, is a member-owned cooperative that supports housing and community development by providing competitively priced loans and other credit products to approximately 900 members and associated institutions in Arkansas, Louisiana, Mississippi, New Mexico, and Texas.

Research shows that permanent housing is the most effective soloution for long-term homeless families. Public funding is available for this purpose. Unfortunately, it can take up to six weeks to transistion families into their permanent residence. Hotel Hope will fill this gap.